A Crown of Flame: A 2D20 Conan Adventure. Scene One

I have decided share one of my Conan 2D20 One Shots with all of you. Feel free to play it through, offer feedback good or bad. I tried to leave many of the details vague, to allow the user more flexibility to jimmy this into their current campaign. Feel free to change the locations to suit your needs. Bare in mind, that when I write my own adventures, the structure below is not even close to how I write it if it was just me. So this is my first attempt to write a structured adventure that is meant for others and not just me.

The thing I like the most about this 2D20 Conan system is the fact that this game is designed to play much like the stories written by Robert E Howard, which is episodic in nature. This allows GMs to get players quickly involved in a story. Each session is run as an individual episode and after several sessions, you can look back and see a series of short stories as if you were reading the Conan short stories that you had written yourself! Its a pretty cool feeling if you ask me.

A Crown of Flame

Somewhere in the northern portion of the Border Kingdoms near the border of Cimmeria in an area known as "The Great Salt Marsh" The player characters will find themselves in a small outpost community called Granite Lake which is under attack from a Cimmerian raiding party. 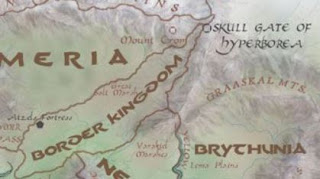 The starting scene opens as the village is under attack and the players are caught up in the life and death struggle from the raiding Barbarians!

During this time, Attalus,  a relic hunter who has been exploring the various ruins in the area approaches the players and ask them to help him escape from the village and head south towards Nemedia, protecting him and the strange but very important artifact which he found during a recent expedition of some old ruins found deep inside the great marsh. It needs to be studied and he offers a reward upon his return to safety.

After escaping from the village, the party finds themselves hounded and pursued day and night, by the very barbarians that attacked the village. The barbarian warlord that is leading this attack is in search of the very artifact that the Relic Hunter has "stolen"

This warlord is searching not just for the artifacts but for its rumored contents, a strange but powerful Lotus Powder which can give powerful visions to the user.

The problem being, is the artifact itself is made of a strange material, which causes a sickness to all those who touch or who is in close proximity to it over a period of time. And the cure to this malady can be found back at the ruins in which the artifact was found.

Do the players try and bring the item to the borders of Nemedia or do they try and solve the curse they find themselves under, and return to the ruins to find a cure? 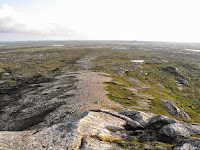 The landscape around this small village although beautiful in nature, is a desolate and brackish wetlands, with many bogs and  lots of open tundra. This small settlement of roughly 300 people makes a living of the lands collecting alchemist herbs and chemicals.  (Lowering the difficulty level for searching for ingredients by 1) Its main source of food is waterfowl and large game. (Caribou, Bear and Moose)

Read this to the players

In what would barely pass as a full fledged tavern in the more populated areas of the world, the old grey bearded individual, who introduced himself to you as Attalus, slams his mug down on the table and grins. "So we have a deal then! We shall leave here in two days and you will escort me to Belverus! Take that time, to gather what ever supplies you can from this damp and wretched town and we shall leave here the morning after next!"  He reaches under the table and draws a plain looking leather pouch "5 gold per person the day we leave, and 10 more each upon arrival" He shakes the pouch and you all can hear the clink of gold inside the bag.

The players can then spend the rest of the day, shopping for equipment or gear. What every they want. Having all the rarities of equipment moved up by 2 difficulties, to the max of 5. Remember though, that all alchemist supplies are easier to find and are reduced down by 1 difficulty.   After what ever shopping and roleplaying the players do is done. Have them note down where all of their equipment is currently kept. Including any horses, carts or other forms of transportation is. (stables, etc) Thing to remember is if the players decide to carry all their gear on them at all times. Do not forget the encumbrance penalties.

Read this to the players:

Doom Spend: Spend 3 doom, to force a player character to make a D2 dodge as a flaming arrow crashes through the window. Flamming Arrow: 2CD, Incendiary 2 , Persistence 2.  D2 to dodge.

Read this to the players:

The acrid smell of smoke stings your nostrils as you clamor outside carrying what ever belongings you could. The visual site is one full of chaos and death. Heavy fur cloaked beings are pouring through the town gates and into the square. The town militia are all but overwhelmed. Numerous fires are burning uncontrollably!  All around you, people are locked in mortal combat as they fight off the invaders. But your instincts tell you, that due to the swiftness and the ferocity of the attack, Granite Lake is already lost and the defenders just do not know it yet.

Give your players sometime to figure out what they are going to do. Their horses are still in the stables, and belongings could either still be back in the now burning inn or stored with their horses as well.

When the players decide to act. Read this to them.


"Over here!!" You hear the yell over the din of combat! Looking across the small town square, you can see your current employer slumped up against a side of a small building. He seems to be holding his side with blood dripping through his fingers.

If the players decide to head over to Attalus, have them nominate a leader to lead the group over to him. After the person is nominated have him make a Group D2 Observation Skill Check. I would recommend not telling the players what skill is required till after a leader is picked. (of course, after finding out what skill is required, they can assist as normal) A failure of this roll will have the party come face to face with a group of savage warriors, hell bent on killing them. (The GM may then spend doom as per the normal rules at this point allow the hoard to attack first. Which I recommend)
If the party succeeds, they can spend momentum to reduce the over all total of the barbarians. Two Momentum per Berzerker. (Conan the Barbarian Source Book or Conan Core)

The party will face 4 Toughened Berserkers.


The GM at this point should really use as much doom as he can in the fight to really put the players on their heals. The town is lost and will soon be over run by the horde. Having this fight with the bersekers should install a sense of urgency to leave the town in all haste. There is a high chance that the berserkers will place a few wounds onto the players.


If the group decides not to head over Attalus, or takes to much time trying to make a decision. They will notice that Attalus has disappeared in the chaos, and they have drawn the attention of the attacking barbarians. They will end up facing 2 mobs of  5 Barbarian Minions (Use the default Savages Minions from the Core Book. But arm them with Battle Axes, Medium Shields and Short Spears)

If the players do decide to head to Attalus, (I used the stats for Kallian Publico from Conan The Thief Book, pg 83) But have his current Vigor marked down to 6 and his Resolve 4 to represents the his wounds.  After making their way over cross the street and facing the Berserkers. (Kallian is a Toughened NPC, with Max 12 Vigor, Max 8 Resolve and can take 2 wounds.

Read This
"By the gods! you must get me out of here" Attalus said, holding his side tightly, blood dripping from between his fingers. "If you get me out of here and to my destination ill throw in a purse full of gems!"  (Value of 50GP) He coughs weakly, blood spit out as he used his free arm to wipe his face.  "Quickly, we must hurry before we are discovered!"

It is now that the players have a choice to try and escape.

There could be several locations in the town that they decide to go, if they have their gear spread out. But to get to each location the group will need to make a D3 Group Observation Check (With people assisting if they want) to be able to navigate there way to each location. Or individual players can do a D3 Stealth check. But if you do a stealth check, no one can help you and you can not assist others. Any failure will result in running into 2 mobs of 5 savages (minions) for every complication, rolled. tack on one Berserker with the initiative.  Momentum and can be used to reduce the minions on a 1 for 1 basis, while two momentum will remove a Berserker.

GM TIP: Some suggestions on where the group can go.

Stables: to get their horses and travel gear. Or steal some horses perhaps?
Lodgings: If they needed to run back to their lodgings, if its not burned to the ground (GMs call)

If they lost sight of Attalus, they can go search for him. Same rules as above but is now a D4 Observation check. If they find him, he is currently being dragged off by a mob of 5 savages. Momentum to reduce the number of those savages is a 1 for 1 basis. And Attalus will also now have sustained 1 wound.

They will have time to check out one location before they will be ultimately surrounded and captured. They could split the party and try to get to multiple locations at once.


Stress to the players that time is running out. Stress that if they stay to long, they could very well become surrounded and captured. Use doom, to make them loose items, or throw barbarians at them.


North or South Gates: To sneak out of the gates they will need to make a group stealth roll, as they are being watched by the hoard on the outside. Pick a leader to make the roll, others can assist as the GM see's fit. But if they get spotted, they get spotted by 2 Mobs of 5 Savages who are outside the gates
Jump the wall: Less people watching the walls. This is a D2 acrobatics check per person. Failing here, the person will fall and will suffer 3CD damage with stun.
GM TIP


Doom or complications can be used to bring up a minion or two on the wall..


At any point, the group can surrender. Doing so will result in them being captured by the Horde. If they lost contact with Attalus already. They will end up being tied up with him and become the the barbarians prisoners.

But all of that will be in scene 2.