One thing to be aware of, is that I made the "Talents Page" on the character sheet able to accept Items, so if you want to cut and paste talents/traits from the book, you can create them as an item and then players can drag and drop them onto your character sheets. Makes things much easier to use. 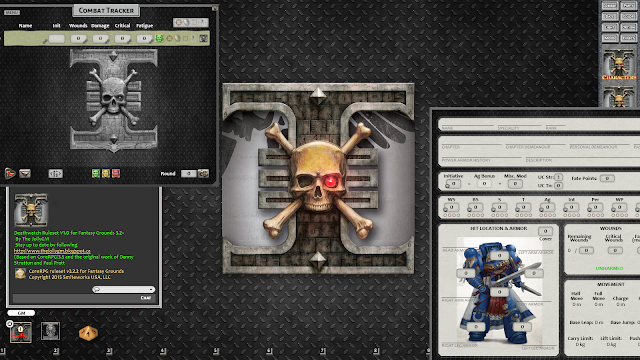 Effects to be placed on the attacker:

Effects to be placed on defenders

ABIL:# will modify any of the base 9 abilities (Characteristics). To add a +10 write ABIL:10 for a -10,
ABIL:-10. If you write ABIL:10 agility then only agility rolls would be effected. Skills and weapon
attacks will not be affected.
SKILL:# will modify any skill rolls. It will not modify other rolls. Use per above.
Using WS, BS, STR, TN, AG, INT, PER, WP, FEL will adjust any roll using that trait. For instance,
using INT:10 will adjust any trait or skill roll using Intelligence by +10. Using WS:10 will modify any attacks and Parry skill rolls. STRB:# and AMMO:# will effect melee and ranged damages. A nice way to handle bonus damage from talents.
REGEN: 1d10, REGEN:# is supported for regenerating creatures.
DMGO: 1d10, DMGO:# will add a damage effect to a PC or NPC as you cycle the CT and advance to the affected.

These are automatic. The system supports adding damage types. Again “effects” is a robust system and using the 3.5 rules guide will help you along to get the most use from it.
I find it is a huge time saver. For instance the PC’s are battling in an area shrouded in mist, rather than
place the Mist modifier to every roll made, drop the Mist effect on each player and NPC, with duration of 0 (0 means it will not expire until the GM removes it.). Now every roll uses the modifier making it one less step players and the GM must take to throw rolls. It is handy.

Using durations is a handy way to manage the applications and removal of effects. For instance Toxins that damage over time, or characters on fire from flamer attacks. Place a DMGO:1d10 fire on them with the duration set, and done. The toxin could be DMGO:8 toxin (duration 2) and for two rounds 8 damage is applied using the reduction for toughness to the creature it is placed on.
The damage types added are per the DH and source book rules. They follow the rules in regards to
damage reduction for armor/toughness.

When using the weapon list always use a small letter e, i, r, x for Energy, Impact, Rending, and
Explosive. The base types form the DH rules. Other damage types s, f, h, w, t are from source books,
for Sanctified, Force, Holy, Warp, and Toxin.
When using DMGTYPE: descriptor in the effects list on the CT, write out the damage type in lower
case. Example: holy, energy, force, etc.