The Cast: Visions Of Destruction

Pregenerated Characters for the upcoming adventure:

Thadiaus, is a true chaos space marine. He was born on the world of Xurunt in the Screaming Vortex, where the peoples are cold and merciless. Captured during a raid by a war-band known as the Brazen Claws, he was pressed ganged into service and joined the ranks of the Brazen Claws and forced to undergo the harsh test and surgeries to become a Chaos Space Marine.

Thadiaus, excels in combat and loves the rush he gets while engaged in melee.  He recently departed the Brazen Claws in search of glorious combat after he felt that his chapter was weak and not worthy of a warrior as great as he will eventually become. All will know his name and tremble in his sight! 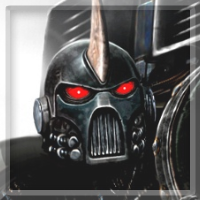 Gorgon, once a proud member of the Astartes. His formal chapter "Golden Eagles" was sent on the Crusade into the eye of terror, when their chapter master was found to have been corrupted by Chaos and executed by the Holy Church of Terra. It was during this ill fated crusade that, most of his brothers were killed or lost. But, during this time Gorgon discovered that the Chapter Master was never corrupted, but it was the high ranking church officials that were tainted. His master was setup and executed, by orders of the church.


Gorgon vowed to have vengeance for his brothers and his master and has made it his mission in life to expose and destroy the false church for what it is, and restore honor to memory of the Golden Eagles.

Ardent is a devoted follower of the powers of the warp. Once a devote member of the Astartes Chapter the "Ultramarines" he killed his own master when he felt that his master was trying to hold him back from true greatness.

After the murder, Ardent made his way to the Screaming Vortex in search for great  arcane power. The powers of the warp can be harnessed and he will wield it, even if his quest will lead him to his doom. 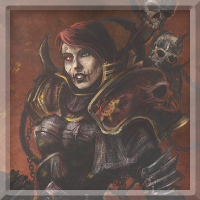 Sasha was a medic with the Cadian regiment of the Imperial Guard. She was a stout defender and fearless when under fire performing emergency care to the fallen around her.

She recently went AWOL, when after a senseless battle with the xenos "Nids". When many belonging to her regiment were slaughtered when exposed to vile toxic spores.  She remarkably was unscathed by the toxins. She has become obsessed as to why she was not killed. Her quest for answers as to why she was unaffected has led her to the Screaming Vortex.

Bre was a brash young girl, when she fled her homeworld of the Piety of Seth, when it was discovered that she had strange powers. Her family instantly disowned her, and she was branded as a witch by the local church dioceses and was about to be cleansed. She escaped, when she somehow manged to convince a Rogue Trader to take her from the planet.

Over the years of being alone, and rejected she has grown bitter and has learned to hate the Imperium of Man and the church that goes along with it.  She vows that her home world will someday rue the day that they cast her out.

Athore is a high ranking official in the Arbites Administration. Althore, has become aware that his position allows him to enjoy some of the "finer" things of life. Having sway in such an organization as the Arbites, he  has learned to use his power to gain favors, drugs and other items of enjoyment to sample from the vaults of holding.

Using his position, he has been travelling the galaxy looking for new and undiscovered pleasures. His latest indulgences has led him to the Screaming Vortex where he seeks to get "more bang for his buck."