I got some exciting news to share! For many years I have been creating my own maps for my games that I run. The biggest problem for has been that many of the games that I run, are not usually not considered mainstream.

Most maps that you find online, usually cater to those rpgs. Leaving me having to find something that I can shoe horn into my settings. So I started to try and make my own.

Just recently, I have decided to take the plunge and start sharing the maps I make with the millions of other members of the tabletop RPG community, which I am so proud to be a part of.

So check out my Drive Through RPG store page here!

Now, I as far from being a professional map maker as one can be, but I make these maps to the standard that I would use at my own tables. Designed to be simple, easy to use, somewhat geomorphic and with the ability to be thrown quickly into your virtual tabletop software of choice. (Fantasy Grounds, Foundry, Astral and Tabletop Simulator)

So with out further delay, I would love to introduce to you The Jolly GM Basic Zoned Dungeon Tile Set. Seeing I try and play games that use zones more so then grids, I made this tileset for those games specifically. Seeing I play a lot of Conan, having some basic map tiles on hand is a good thing! 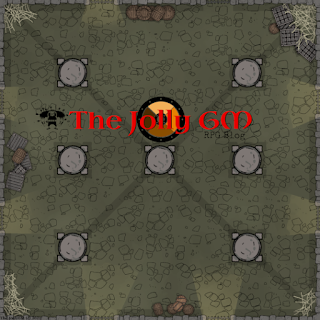 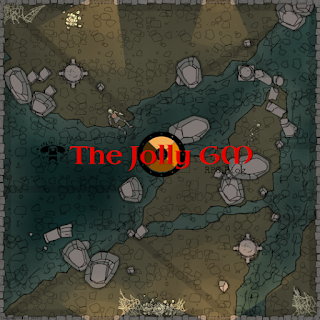 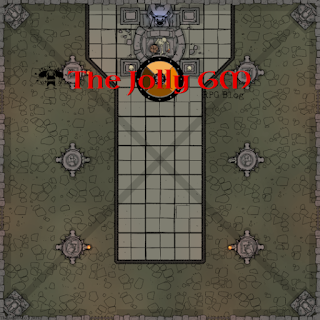 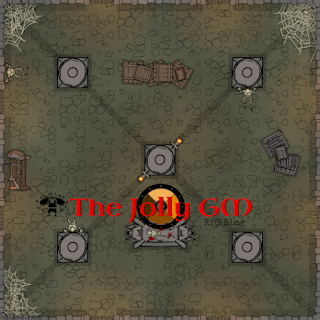 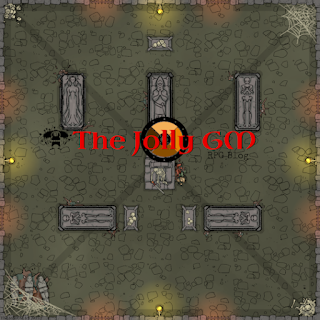 With tile set 1, you get 5 standard dungeon tiles. Simple easy designs, and affordable. You can put these maps together to make larger dungeons, or simply use them as individual set pieces.

Eventually, I am going to be adding to these zone tiles. Lighting and LOS for any of those people who use my maps in Fantasy Grounds and Foundry, hopefully for a buck a map, people will like what they see and get.

I got more battlemaps in the pipeline. Soon my tactical battlemaps will be available!

Here is a small taste of what is to come. The JollyGM Tactical Battlemaps 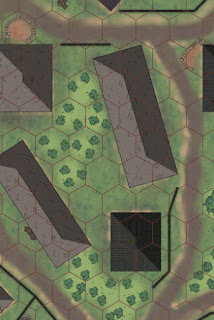 How do you set a difficulty for a trap?

I often get asked this question a lot, and I have spent a long time searching, asking and trying to figure out a good answer.

"How do you set the difficulty to detect a trap with out telling a person that a trap is actually there?"

As in most cases, in 2D20 Conan. A difficulty number needs to be assigned before a player can roll, as they need to know just how hard its going to be to roll. The problem being, if a GM sets the difficulty high, and the player fails his roll. He may just say.. "well that was a hard check, there must be something there."

Now, the big problem is that the Core rulebook does not really tell you anything about detecting traps, it just says you use the thief skill to do it with. And I am fine with that, and for the longest time. Me, like many others set a hidden Momentum Spend number that a player would need to get on a D(1) roll.

Well, while running our current ongoing Thieves campaign for Conan, one of the players took a talent that I have not seen much, and that talent breaks our current way of checking for traps. That talent is the observation talent "Its a trap." It reads..

"You can spot covered pits, pressure plates, fulcrums, and other constructions designed to keep thieves out of burial chambers and treasure rooms. With a successful Challenging (D2) Observation test, you can detect any nearby traps as a Minor Action....."

Here, it clearly tells us what we need to roll to check for traps. So with this talent now in play I had to re adjust my way of thinking.

I am a person who HATES having to come up with homebrew house rules for games. I hate having to do it, but now seeing this talent in play. I have come up with a solution while in my games. And I think it works, and it does not break any core rules. Its simple, I tell my players that in my game there are 3 fixed difficulties for checking for traps. And seeing the GM gets to set these difficulties anyways, I am not adding anything new to the rules.

So my solution is simple. (I think so anyways)

By telling the players this information up front will cause a few things to happen.

And the good news is.. if there is a trap and a player rolls a complication.. Well they found the trap, they triggered it. And if there was no trap to begin with and they rolled enough complications, heck buy the trap with a doom spend. (Thats how I roll.. lol)
So yeah.. That's my take..
Crom has spoken.

Traveling in the world of Hyboria. Suggested Rules for dealing with Travel in 2D20 Conan.

Travel rules in 2D20 Conan RPG are fairly arbitrary in my own opinion and are left to the machinations of the GM.  I am OK with that. But sometimes, I like to have a little randomness to it. I wanted some rules to follow, but I wanted to keep the rules in line with the mechanics of the game and simple to use. I am pretty confident that others may have developed similar ideas to what mine is like. But what ever. So I sat down and decided to see if I could write up something that I could use.

After writing these, I realized that something similar can be used for other situations that are not travel, IE, Investigations, Searching for something, or what ever. So feel free to experiment with this.

First I wanted to Say thanks to the The Swamp who gave me the chance tag along on the 31 Day Challenge. Its been a fun month, I reached and surpased my goal of reaching 250 followers on Twitter, I also managed to get my affiliate status on Twitch, and I get to host on the Free League Publishing Twitch Channel for a few games.

On the 30th day of Christmas Conan, I present to you the Hyborian personification of Jingo The Fool. Avrahim
Read more »
Posted by The JollyGM at 11:41:00 AM No comments:

On the 29th Day of Christmas Conan, from the savage Pictish wilds, strolls Taran - One Who Bites Wolves.

On the 28th day of Christmas Conan. I introduce Elazar.